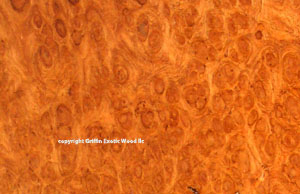 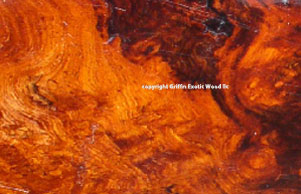 Afzelia burl comes to us from Southeast Asia.  Since about 2005, it has become increasingly difficult to get, especially in the burl form.  High figure burl in Afzelia is now rare.  It is normal for it to have small bark inclusions, which can easily be hardened by adding thin superglue. This is now an extremely rare burl. Import of new pieces is almost non-existent and most pieces have almost no figure. Highly figured afzelia burl is much rarer even then amboyna burl now and pieces with good figure are generally from old private collections rather then recent import.
Grades:
GG minus: has burl figure in various patterns with some gaps between figure
GG: has burl figure that is especially good on two parrallel sides and figure is closer together
GG PLUS: rare: has best figure normally possible for this burl type
If you are looking for Afzelia with Xlay figure, click here

SIZES ARE IN INCHES
unless specified otherwise.