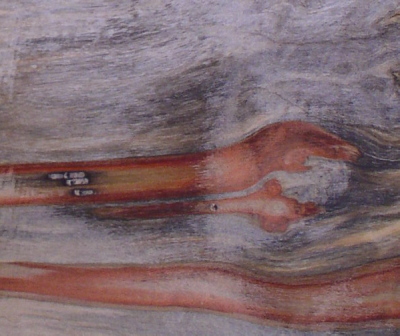 This is a type of maple that was planted by early settlers in the prarie lands of the United States as a shade tree. When not resin impregnated (it is usually sold stabilized for turnery) it is a fairly lightweight wood. Specific gravity is .42 to .45, making it similar to fir. When stabilized with resin, the specific gravity becomes much higher and the wood is considered good for woodturning. The tree has been used for maple syrup production, and the plain wood is sometimes used for making crates or furniture. The most sought after pieces have nice pink/reddish lines and sometimes a little blue grey spalting. The vast majority of boards have no red in them at all. All pieces sold below have been kiln-dried and resin impregnated to stabilize them for turnery, knifemaking and other projects. Grading system:

Primo grade: means the piece has outstanding appearance with really nice lines that make the piece uncommon
Excellent grade: means you will get a nice piece that has some good lines/appearance which most people consider above average.
Turning grade: means you will get a piece that has some kind of figure in the form of lines and/or spalting.
Note: The reason box elder has these great colors is due at least partly to the tree being attacked by insects. Expect some insect holes, which are usually really small, about 1-3mm's most of the time. Black superglue can be used to fill them and can add to the appearance.

SIZES ARE IN INCHES
unless specified otherwise.
Order online, or call us Monday through Friday 970-241-2827
International callers and all Questions:Email us


Note that everything on this page (photos too!) are copyrighted and may not be used
without written permission.  Copyright 2011, 2017 by James Griffin.  If you are a customer
and would like to use some of our photos on your website, call us with your request.